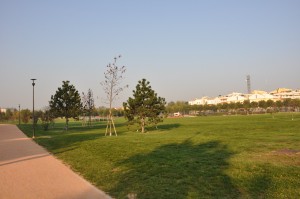 Europa Park in Rho is a further ‘green’ mosaic tile that Fiera Milano Foundation wanted to realize following schedule agreement signed by districts of Rho and Pero, Region, Province and Municipality of Milan, as well as by Ente Fiera, as balance of soil occupied by exhibition center. An over 110,000 square meters green space mosaic housing more than 800 trees, a more than 2 kilometers bicycle and pedestrian path, play areas and many other facilities. New park, completing this equipment, has given the city an equipped green space. 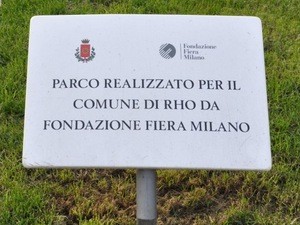 Opened just one year ago – on October 26, 2014 – the new park, which with its 47,300 square meters is the largest in the city, is located opposite the historic Villa Burba. 285 the tall trees, including ten oaks and twenty-five conifers to assure a ‘green’ presence in winter too.
Over 1,000 fragrant and vivid shrubs and a lawn composed of 3 different types (soft and clean-cut grassy and cared for, ‘rustic’, in flower) complete plant equipment facilities. One of the connotative elements of the park is the ground-level fountain, like in square Gae Aulenti in Milan, with water jets illuminated by floor spotlights.
But what immediately stands out is the large grass parterre which extends in the middle, a sort of desired ‘architectural empty space’, surrounded by a Ring, a perimeter and main circular route of park, that shares out users all along the fringe areas and intersects the secondary routes bringing to areas that host play games and equipment services. The main entry point is located on the south, at Villa Burba entrance, Corso Europa; where transition from Villa to park is completed by a paved square, which is characterized as a compromise between urban and natural element, providing a multipurpose platform at the same time that will be the proscenium, with its historic Villa backdrop, for outdoor events, to enjoy using the park as a stall.
The designers of Rho’s new park were inspired by elements that characterize background, from the farming of the wide plain that spreads from the town of Rho, to the bordering historical-architectural-cultural developments (Villa Burba and Villa Scheibler). Just the closeness of Villa Burba’s artistic structure produced a mixture and, somehow, a synergy between these two areas that benefits both of them, whether from the artistic viewpoint (Villa Burba includes architectural motifs) or that functional (new park is equipped with the most innovative and functional furnishings for playful and motor-physical activities, almost missing in the old park).