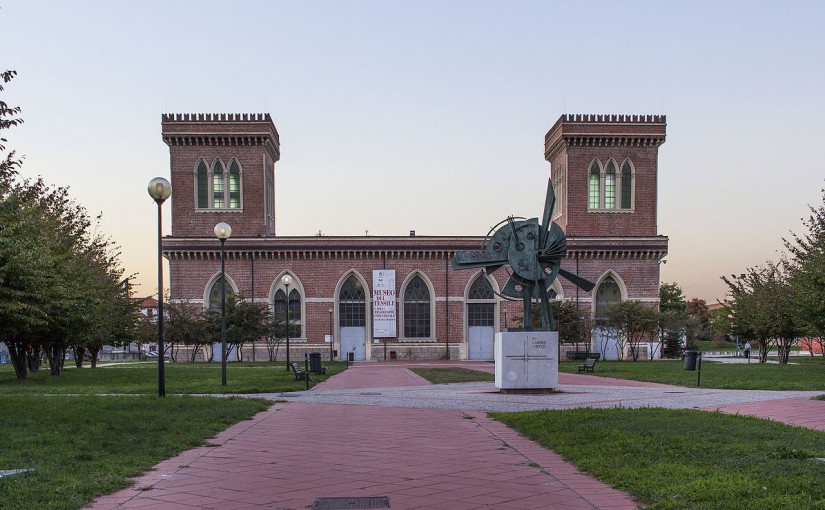 A triangle. A corner of genuine Lombardy. We are speaking of the area between A4 motorway southwards,  A8 motorway northwards, and Ticino with its beautiful natural park westwards. Eastern peak of this strip of land is Rho territory. The eastern one is characterized by shores of one of the most charming Italian lake basins: Lake Maggiore. In a westward direction, there is the second busiest airport in Italy, Milan-Malpensa.
In the middle, two names gone down in region and Italy history: Legnano and Busto Arsizio.
Legnano, battle town of the same name – I forgot, South-Eastern peak of this triangle is Magenta – is the only place, with the exception of Rome, mentioned in Mameli national anthem, and, like any Italian town worthy of its name, shows interesting historical and architectural buildings worthy of a visit (Basilica of San Magno, Visconti Castle). But it’s so-called ‘secondary’ art, that often goes unnoticed, to quote: this town holds a building known as ‘Legnano skyscraper’, which was designed in the early 1960 by architect Luigi Caccia Dominioni; as regards industrial archaeology, legacy of the past which made it the second town with the highest number of industrial workers after Sesto San Giovanni, Cotonificio Cantoni, the only Lombard company to take part in ‘Paris Universal Exposition’, looks out onto Corso Sempione.
Former cotton mill Bernocchi, Manifattura di Legnano and building once used by De Angeli-Frua are also important from historical and architectural viewpoint. Even the original core of Officine Meccaniche, created in the early Twentieth Century, is also appealing.
After province of Milan, now we examine that of Varese to explore Busto Arsizio.
Busto Grande, so called by its citizens to distinguish it from Busto Piccolo, the current Busto Garolfo, is a densely populated town of nearly 83 thousand people, primary textile core wherein – it was the year 1375 – “in almost every home beats a frame”. This Bustocco town includes significant architectural works coinciding with Art Nouveau period style, from various mansions (Villa Ottolini-Tosi, 1902, Villa Ottolini-Tovaglieri and Villa Leone-Della Bella), to the beautiful examples of industrial archeology. The town’s industrial fame had become such that it began to be called ‘Manchester of Italy’ or ‘the 100 chimneys town‘.
And it is just inside one of these former textile factories, Cotonificio Bustese ex Ottolini, which now rises the Museum of textiles and industry of Busto Arsizio. Other enterprises worthy of note are neo-gothic Calzaturificio Giuseppe Borri of 1892 and Mills Marzoli Massari of 1906, all recently restored.
Before you go away, you have to taste the Bruscitti, a plate of slow-cooked shredded meat with fennel seeds and wine. Among others, in Busto Arsizio is based, since 1975, the Magistero dei Bruscitti da Büsti Grándi association, which is put effort into spreading knowledge, inside and outside the town, of Busto’s rustic cuisine.

[Photo:  the Museum of Textiles and Industry of Busto Arsizio inside former Cotonificio Bustese (wikipedia.org)]