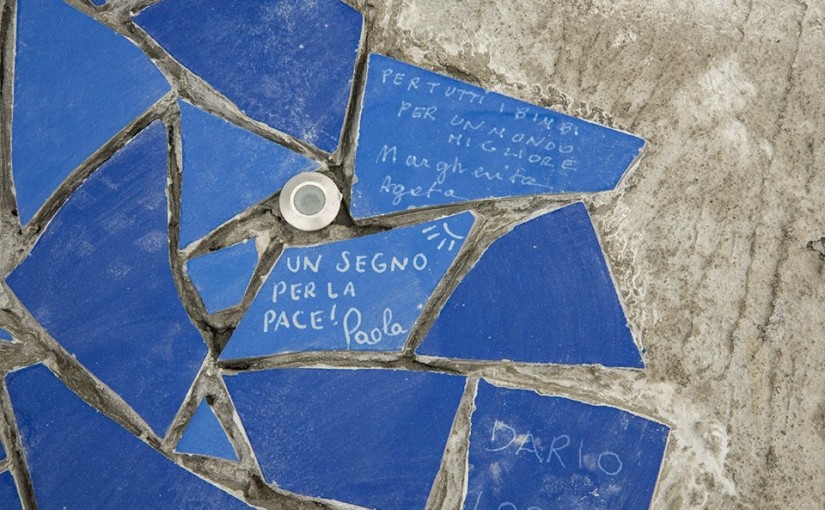 A public and permanent artwork, created by citizens of the world: this is Costellazione 2015, the largest blue mosaic square, which reproduces the constellation Aquarius. Six team works formed by Brera Academy students will lead people, who will choose to make their own contribution putting their signature and installing their tile. A work that can be defined one of the first participatory monuments in Italy, realized thanks to the contribution of citizens, tourists, students, Expo visitors from around the world, which will remain the only legacy of Municipality of Rho as part of the Universal Exposition 2015.
It was a long time ago since the day of the first tile laying carried out by the Mayor of Rho, Pietro Romano, in the presence of the Commissioner of Expo 2015, Giuseppe Sala, and the Mayor of Milan, Giuliano Pisapia. Today, and the latest aerial photographs show it, the project appears even clearer, also for all its scenic beauty.
A great blue sky where there are many signatures. A multitude. Even on social media the project has several followers, from Facebook to Twitter, via Pinterest and YouTube: Lorella B., on Facebook page says: “I’m in the sky, too!”, enthusiastic opinion that testifies the great success of this initiative, like Antonella M. with her “Smart and enjoyable guys, it’s what I saw at Expo yesterday,” or even that of Federica P. “Congratulations, great job, well done!” But above all there is the desire to share the experience, also through the tiles geolocation, like Elena S. who writes “Please, remember to inform me by e-mail where you placed my 4! Have a nice day.”
Ordinary people, from all over the world, who decided to share in this innovative venture. Each one chose his blue tile between those available and not yet engraved and wrote above that a few words or his signature using a white pencil provided on site. But what happens then? The tile, delivered to the participating students of Academy of Fine Arts of Brera, will be exactly engraved following the sketch marked by pencil. In this way, the message will remain indelible through time.