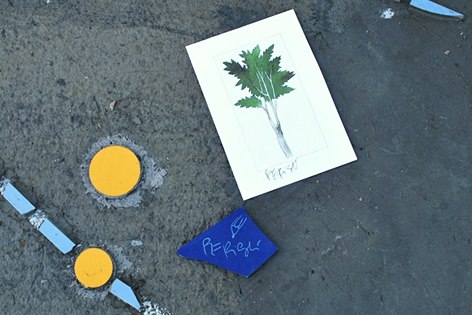 We end in style this triptych on Costellazione tiles ‘signatories’. From ordinary people, through delegates from the countries of the world, we come to VIPs. Even the stars wanted to be there, helping project visibility with their participation.
And who could ‘plunge’ into the blue square better than Umberto Pellizzari? Last 27 October, the famous Italian freediver, several times world record holder, who broke the 150 meters deep record, signed his piece that is inspired by his feat. A curiosity about him: Umberto Pellizzari, who was born 50 years ago in Busto Arsizio, near Rho, surprised everyone getting the Costant Weight with -65 meters world record many years ago, beating of 3 meters the last record reached by Pipin Ferreras only two months before. This will be the beginning of the antagonism between these two athletes during the 1990s and 2000s, which will also become a movie, OceanMen.
Also the great painter and illustrator Tullio Pericoli – his drawings style, simple and elegant, as his watercolors are published on the main magazines, newspapers and book covers by many publishers – left a signature and a watercolor.
Also children (and, why not, former children) were satisfied: Cristina D’Avena, singer, actress and famous for singing very popular cartoon theme songs, as Creamy, Memole, Cat’s Eyes, the Smurfs, Capitan Tsubasa, was the special guest of Rho Buona Notte Bianca, event devoted to children. At that time, she signed mosaic tile of Costellazione, leaving its mark forever in the blue sky of Aquarius.
We close with the nipping Dario Vergassola, comedian and singer-songwriter coming from La Spezia, who wanted to leave his signature on what he describes not square, but “dreams-paved road”.
Ordinary people (enjoyable the video of the two ‘delegate’ from China and the video message from Veronica), organizations and celebrities had an unique factor in common: the desire to be there, there on that square, in the blue sky which is Costellazione.